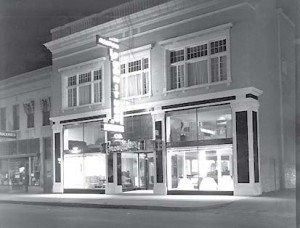 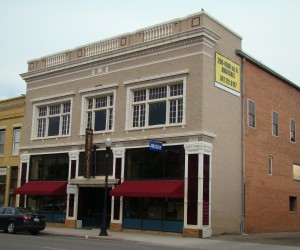 The front page of the March 1, 1918 edition of the Sheridan Post announced the opening of the new City Furniture building build by John B. Kendrick on north Main St. Under the headline, “Establishment that Is A Model of its Kind,” one traveler quoted, “I am simply astounded to find such an establishment in a city of this size. I speak conservatively when I say there is nothing to equal it between Omaha and Spokane.” The speaker went on to say that not even in Denver could a structure as impressive be found. The building was described as “magnificent,” “brilliantly lighted,” “artistically conceived,” and “a model of perfection.” An exceptionally high ceiling allowed for a balcony to split the main floor, running the full perimeter of the room. City furniture occupied the structure until the year 1942 when Brouilette’s furniture moved in for a short period of time, and later The Sheridan Press daily newspaper published from the building between 1945 and 1978. It was discovered in 1979 that the basement floor has been lowered to accommodate the tall printing presses.