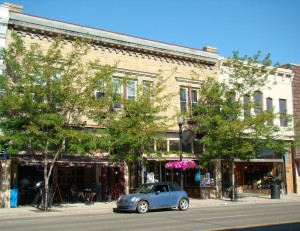 Built by Judge Metz for his law office, the building was conveniently located across the street from Sheridan’s original frame courthouse on the corner of Grinnell and Main. In 1926, the structure was occupied by a dress shop called the Toggery Shop. On November 1, 1926, Geneva Collett, sister to Sheridan’s most famous “soiled dove,” Madam Pearl, entered the Toggery Shop and shot Mattie Tidwell who was engaged to be married to the sisters’ brother Robert. Geneva was the first woman in Wyoming to be sentenced to life in prison, where she died years later of a heart attack.