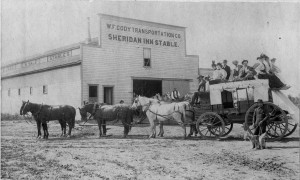 This block was the original site of W.F. Cody Transportation Company, Buffalo Bill’s own stagecoach line to the Black Hills. The first building was built in 1894 for the business, which ran from this location from 1894 until 1901. It was also used for a long period of time as the Sheridan Inn’s livery stables. In 1923 the old stables were torn down and today’s building, with its stone exterior and large windows, was built just down the block to house a garage. While it has changed hands over the years, it has continued to be used for transportation purposes, including automobile repair and body shops, car sales, and as a bus stop, fulfilling the building’s original purpose of bringing people into Sheridan.