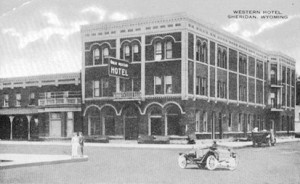 A frame structure built in 1887, the Windsor Hotel was one of Sheridan’s first hotels, and can be seen in most early pictures of downtown Sheridan.  In 1896, James Birchby replaced the Windsor with the brick structure seen today.  Ed Towns operated the building under the name of Hotel Towns, and later the Great Western Hotel.  Built from mining revenue, the Western Hotel once housed a saloon, barber shop, movie theater, and a spacious lobby.  Sheridan’s trolley car system operated from the Western Hotel, traveling to the coal mines and to Fort Mackenzie.