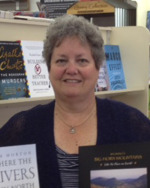 Robby Smith has been one of the proprietors of Sheridan Stationery, Books and Gallery on 206 N. Main since 1994. The independent book store, which Smith operates with her husband, John, sells local and regional books, best sellers, kids’ books, greeting cards, calendars, and gift items.  “The store has been in this location since 1957, but was at another location in downtown since 1935,” says Robby.  She is proud that they are the only independent bookstore located in town.  “There are many places that sell books in Sheridan specific to the type of store they are; King’s sells western-themed books, Roosters has Christian books and so forth, but books are our main business.”  As for what she does as the owner/operator, Robby just laughs and says “everything.”

The Smiths bought the store located in downtown Sheridan not only because they grew up here, but because “I’ve traveled to other places, but there is no other place I’d want to live.” Robby and her husband have two daughters and three grandkids. She enjoys trips to the mountains and being outdoors when she’s not in the bookstore.

Robby has been on the board “for a while. I got involved with the DSA because I feel you should give back to your community. Since we have a store in town and are property owners, we feel we need to be involved.”  She currently sits on the Historic Promotions Committee, Goose Creek Polo Cup Committee, is a Co-chair for the Wine Fest Committee and takes lead with the beautiful flowers on Main Street.  You can find Robby and John at almost every event the DSA has, working hard with a smile on their faces.