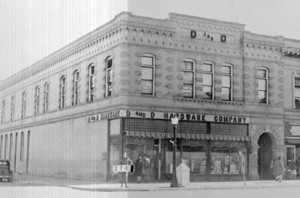 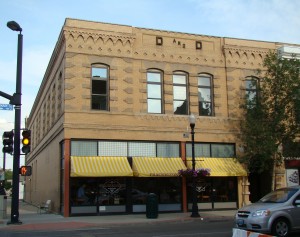 The hardware business of Brooks and Diefenderfer in Sheridan dates back to at least 1888, Dinwiddie later buying Brooks’ interest and changing the name to Diefenderfer and Dinwiddie Hardware. Built in 1919, the stone Diefenderfer and Dinwiddie Hardware store was constructed on the site of the frame hardware store, and remodeled in the early 1960s, housing a clothing store and later Brown Drug Store. Restoration in the mid-1990s returned the building to its original design. Reminiscing on D & D Hardware, one of Sheridan’s life-long residents was featured in the Sheridan Press under the headline “Bats Swarmed About Kerosene Lamps that Lit Main St. Back in 1888′: “…when evening came the men would take fishing poles from [the D & D Hardware] store front and knock down the bats that flew around those old kerosene street lamps that set up on posts.”