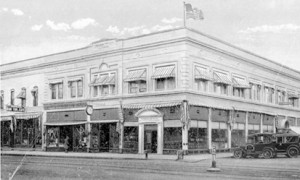 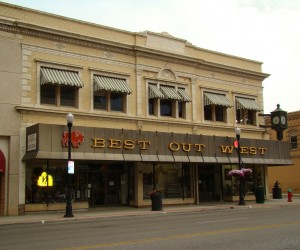 John B. Kendrick, a governor and U.S. Senator, commissioned this building that became Sheridan National Bank in 1914, marking it with the distinctive Kendrick “K” at the top of the structure. Also known as the Jim Lamb building, it was used as a skating rink and dance hall. Later, the corner space was occupied by Woolworths. The structure had glass panels on the Brundage Street sidewalk to let light into the basement, which runs partially under the street. Be sure to notice the old clock on the corner of the building. It is a twin to one found on Santa Monica Blvd. in Hollywood, California.